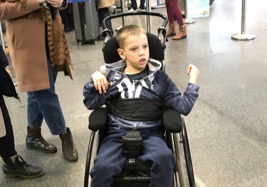 Andrei Is Home at Last!

In two early 2018 updates we shared with you the remarkable story of Andrei, a 6-year-old boy who, in 2017, was rescued from near death through the collaborative efforts of our Ukraine Without Orphans colleagues. (See the blog post here.) Andrei, who has cerebral palsy, epilepsy and respiratory issues, had spiked a temperature of 105 degrees and had been left to die by an orphanage worker.

After initially not being allowed to even enter his room or call an ambulance, the UWO team who discovered him raised public awareness of the situation and contacted children’s rights authorities. Andrei was finally allowed to be transferred to a special pediatric hospital in Kyiv. UWO hired nurses to provide around the clock care for him, and he slowly began to sleep through the night and gain weight!

By 2018, Andrei was in a temporary foster family while the team explored options for potentially reuniting him with his biological family. (His parents, who lived in rural Ukraine, had been persuaded by doctors and social workers that Andrei could be better cared for by the “specialized” caregivers and medical staff at a special needs orphanage. So, with heavy hearts, they had reluctantly sent Andrei to the orphanage, where his horrific story began). A team had also been assembled to thoroughly investigate the situation of orphanages in the region, and criminal investigative proceedings were initiated to ensure that Andrei’s story will never be repeated.

After much deliberation and soul-searching, Andrei’s biological family ultimately decided it was best to relinquish their parental rights due to their extremely difficult life circumstances and a lack of local medical professionals and support to assist with Andrei’s special needs. They gave him up for adoption.

Andrei’s special physical needs made him very difficult to place in his region of Ukraine. But even those needs did not make it too difficult for God to find a home for him. Just a few weeks ago, Andrei was adopted by a family from the US and is beginning a new life of healing and love! What seemed like a nearly hopeless situation has become a real-life miracle! Won’t you join us in praising God that Andrei, now nine, has found a loving, caring forever home? And please pray that his new family will adjust quickly to caring for his special physical needs — as well as to providing the encouragement, love and spiritual/emotional/psychological care that he needs.